Healthy Ireland launched the 2019 summary report with the findings from the #HISurvey2019 on November 20th. The full report can be downloaded at: https://www.gov.ie/en/collection/231c02-healthy-ireland-survey-wave/

The report covers findings across many different elements crucial for a healthy lifestyle, with sleep being introduced as a topic for the first time this year. Other topics being covered include: physical activity, physical measurements, sedentary behaviour, general health, smoking, tobacco packaging, usage of GPs and other healthcare professionals, sun protection, parents and health, and caring responsibilities. 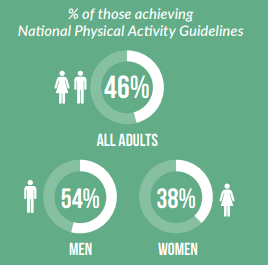 The survey results did show a desire for change in activity levels in those not currently meeting the guidelines. 64% of people want to be more physical active than they are currently, with females most likely to want to change their activity levels (66%). The biggest barrier to being more physically active was reported to be time restrictions, with over a third (36%) reporting they are too busy due to work or study, and 24% reporting they are too busy looking after family. Age was also a factor for those showing a desire to be more active. In the 15-24 age group, 70% of those not sufficiently active wanted to be more active, increasing to 72% and 73% respectively for those in the 25-34 and 35-44 age groups. This then declined to 63% for those aged 45-54, however for all age groups over half those not active enough wanted to increase their activity levels.