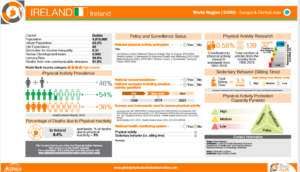 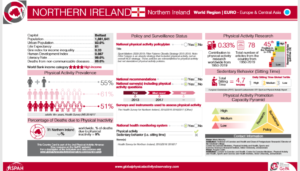 The first set of “country cards” were produced in 2015 for 139 countries worldwide with data up to 2013. The findings highlighted an unequal distribution of PA suveillance, research productivity and policy development and implementation around the world. On the 27th of January 2021, after six years, the second set of country card have been released based on data up to 2019 from 217 countries (150+ local representatives part of GoPA! Network). The findings indicated equal or increased PA surveillance capacity, research productivity and national policy development and implementation.

Ireland’s representatives on the GoPA! network are Dr Niamh Murphy from Waterford Institute of Technology and Elizabeth Loughren from Sport Ireland and, in Northern Ireland, Prof Marie Murphy and Dr Angela Carlin from the University of Ulster. The GoPA! country cards have been launched with no funding, purely supported by the dedicated time provided from individuals and agencies in the member countries. It is owned by stakeholders, not governments, and thus can be more rapidly flexible and collect data from sectors beyond health, increasing its applicability and relevance.

IPARC is an exemplar process of the collaborative work in Ireland to improve knowledge production, translation and implementation. I-PARC is one mechanism for improving Ireland’s performance on global physical activity metrics and, most importantly, to enabling more people to be more active.

“We have the advantage of being a small country and, with I-PARC and the NPAP we have established the mechanisms and the relationships. Both of these are now at the end of their term and, with COVID, the value of physical activity for the health of the nation has never been clearer. We need to re-affirm and double our efforts.”      Dr Niamh Murphy (WIT)

GoPA! is a constituent of the International Society for Physical Activity for Health (ISPAH). ISPAH held a webinar on ‘The Science Behind the Second Set of Global Observatory for Physical Activity Country Cards’ on February 15th at 7pm GMT. The recording from this webinar will be made available for ISPAH members here. For more information on GoPA! or to find your country card click here.