Impact of COVID-19 on our physical activity habits.

Impact of COVID-19 on our physical activity habits. 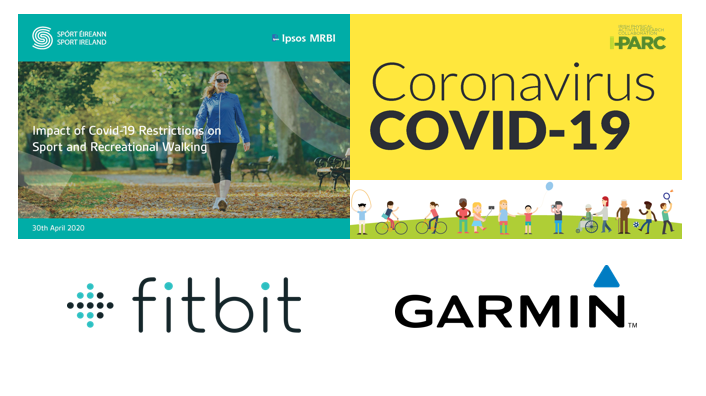 Physical activity can be a valuable tool to continue protecting your health during this time. As we continue to self-isolate, it is important to stay physically active while in your home or within 2km of you home. Physical activity comes with a number of physical, mental and social health benefits for all ages. As the COVID-19 pandemic continues to evolve, it has played a role in the physical activity levels of populations across the globe.

What has happened to peoples physical activity during the COVID-19 pandemic?

On the 23rd of March, Fitbit shared data that showed data collected from their 30 million users around the world. The key finding was that almost all countries studied saw a decline in the average step count compared to the same time last year. This percentage decline in steps varied from country to country, ranging from 7% to 38%. Fitbit users in Ireland saw a 9% reduction in the number of steps achieved on the week ending 22nd March 2020. This could be due to a number of reasons, including the change in lifestyle as some people became unable to work or began working/studying from home meaning a reduction in occupational and transport (i.e. travel to/from work and college/school) activities. 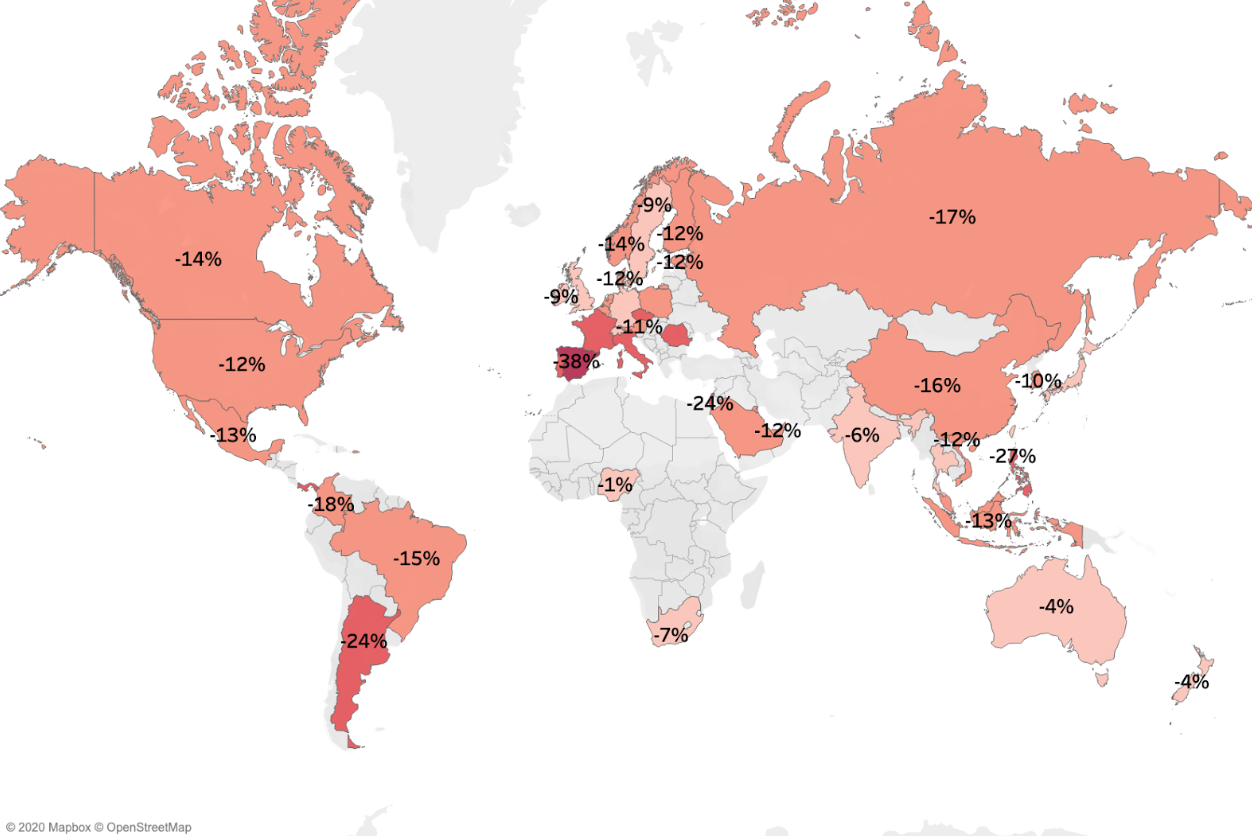 The same trend was captured by Garmin, who also manufacture wearable fitness trackers and smartwatches. The company said that it found a “massive decline in the overall number of steps taken during the second two weeks of March”. What was interesting in the data, was the increase in Garmin device users taking part in virtual cycling classes (up 64%), practicing yoga for its dual physical and emotional benefits (up 11%), and going on outdoor strolls (up 36%) as a way to escape the house for a few moments a day during quarantine. This data begins to show how people began to adapt their recreational activities to the change in lifestyle due to mandatory government restrictions.

What has been the impact of the COVID-19 restrictions on the Irish Populations sport and recreational walking?

On the 30th of April 2020, Sport Ireland published a report showing how Irish adults (!5+ years of age) physical activity habits have adapted during the COVID-19 restrictions. The research, conducted by Ipsos MRBI on behalf of Sport Ireland, saw just over a 1,000 people complete a survey asking about the previous week on three occasions:

The research reveals that Irish adults have adapted remarkably well in keeping up their sport and recreational walking habits during this difficult period. More adults are now physically active than before the restrictions were introduced with a substantial increase in the numbers walking for recreation. In addition, the numbers running and cycling increased during this period, while the closure of many sports facilities and curtailment of team-based sports caused a decline in personal exercise(gym-based activities), swimming and gaelic football among others. 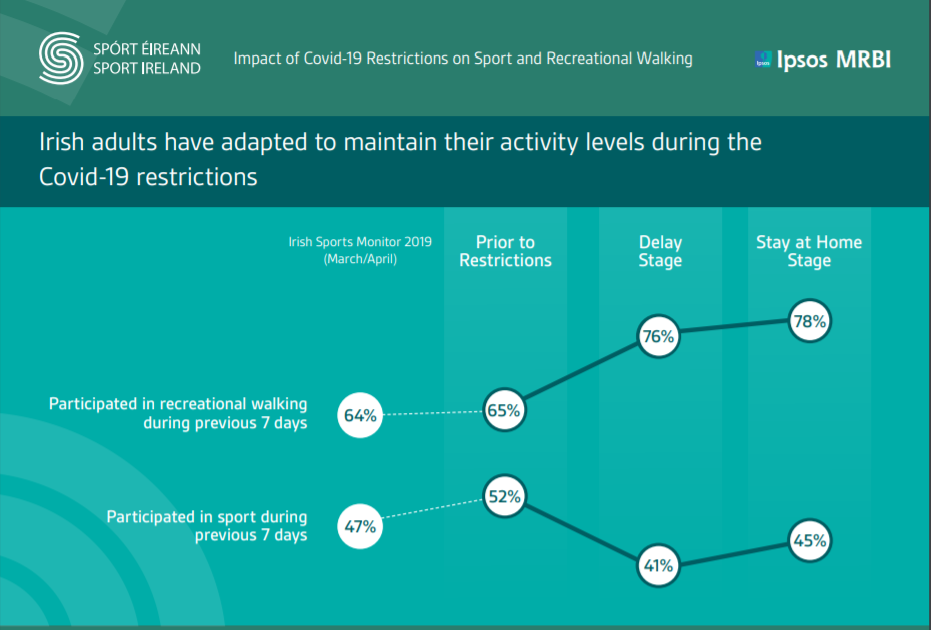 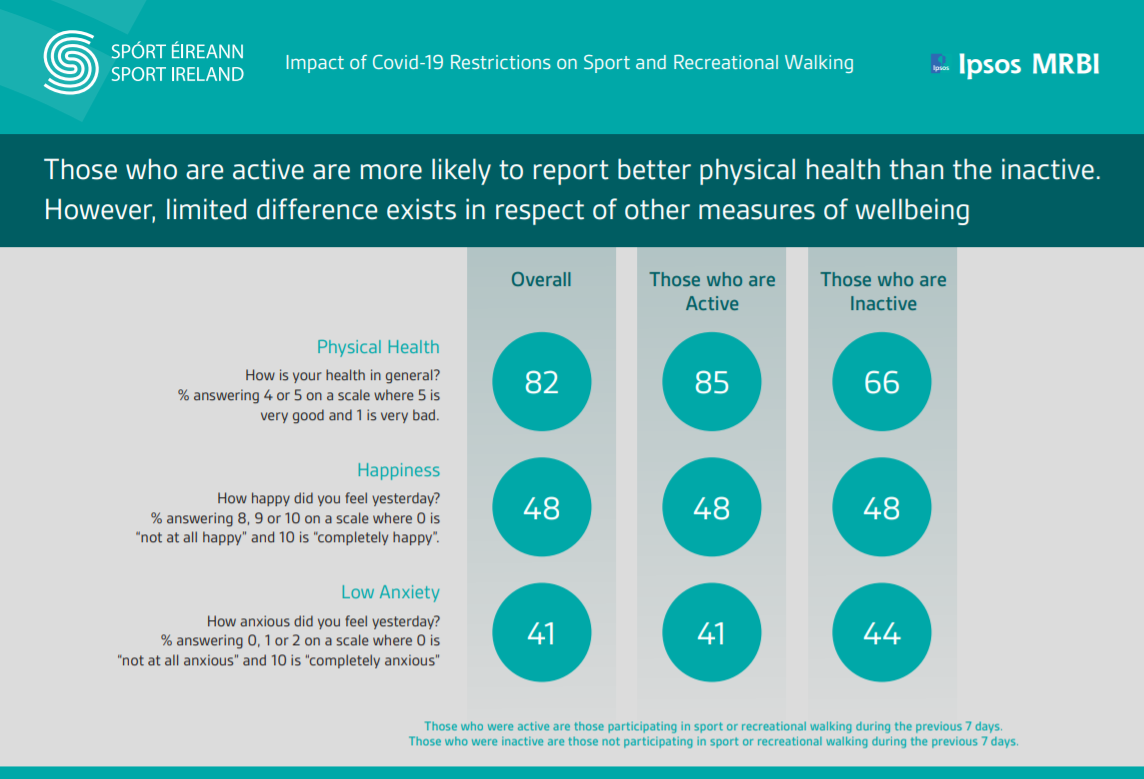 Minister of State for Tourism and Sport, Brendan Griffin TD, noted that “The decline in the number of inactive people is also welcome and in line with measures outlined in the National Sports Policy. I commend the great work being done by the National Governing Bodies for Sport and the Sport Ireland Local Sports Partnership Network in providing opportunities and guidance on staying physically active. These organisations will continue to have a big role to play in keeping Ireland physically active and participating in sport once the current restrictions are eased.”

Check out the full report by clicking here

How active should we be?

The World Health Organization recommends that:

Adults aged 65 years and above